"The Mirror's Edge, a Cassian Folktale"


Here is a short story to be added to the campaign world we are building, The Chronicles of Ballidrous.  Enjoy!!!

"The Beast!"
With a sharp intake of breath, the traveler awoke to pain.  Thickening blood marred the front of his shirt.  A thick mass pinned his legs to the ground.
The traveler forced his eyes to focus on this new and painful day.  The body of the creature lay atop him and the smell of blood and fear saturated his body and clothes.
Thrusting the brute off, the traveler pulled himself to his feet to see what remained.
The creature laid there in a knotted fashion.  Coarse hair coated the body from head to toe.  The facial features seemed a cross of a dog and a bear.  Large canines lined the extended jaw with the lips pulled high and bloodied.  Its arms and legs were elongated with matted paws ending in sickle-shaped claws.  The bestial eyes were a deep yellow with round pupils now drawn to pinpoints.  The full size of the creature could easily match that of a horse.
The traveler, knowing this no natural beast, decided he must burn the monstrosity.
Pain ripped through his mind as he reached for the creature.  Just above the traveler's left elbow, the beast had torn hard into his flesh, leaving large gaping slashes.  The cuts looked deep and the wound appeared to already be reddened and festering.
Pushing through the agonizing process of collecting wood, the pyre was built.  A flame that started as a mere spark quickly grew into a fast-burning blaze.  The fire, upon contact with the beast, began to take on a bluish tint.  The smoke billowing above slowed to more of a fluid motion and took substance.  Standing in all her elegance, a young woman hung suspended over the heap.  Her body consisted of a translucent, azure smoke and ended in wispy trails rather than feet.  The only distinguishing features were found in her face.  The traveler instantly placed her visage back to the statue.
The spectral form drifted down to the earth and her desperate eyes were locked on to his.
"You have destroyed my crooked, earthly form.  I thank you," a hollow but distinctly feminine voice came from the wraith.
Turning to see what flickered to his right, the traveler peered over his shoulder only to find her there.
"Please set my soul free…  I am locked…"
With a start, he turned back to where she had stood just seconds before.  There she stood again.
"Seek the land's pestilence, Mother Fletcher her name.  Rotting is she in nature's womb.  The broken trees."
In a blink, she stood away from him and the pyre, in a corner of the house.  Her figure dropped to a knee and peered at the traveler expectantly.  Then she vanished.
The traveler was stunned and lost in a maze of twisted thoughts and emotions.  Without knowing how he got there, he stood over the place she had last crouched, feeling a force pulling him down.  He began to dig with an impassioned frenzy, the pain forgotten.  Breaking through the surface, he found a wooden box that must have been buried long ago.  Picking up the box, his slight fingers broke through the weakened casing and everything fell to the ground.
A glint caught his eye in the loose dirt and debris.  Underneath the rubbish lay a small talisman.  A thin, gold chain wove itself into an unusual, knotted trinket.  The charm was a small mirror with delicate gold trimming.  Taking the talisman in hand, he turned to watch the fire return to normal and die.
After resting an hour, his head began to throb and the earth seemed to give off a cold that penetrated his being.  With his business complete, the traveler thought it best to return to town before his fatigue overcame him.
Twice before reaching the sculptor's house, the traveler took a break when his head would swoon and his steps faltered.  From what little memory he retained of the following events, he recalled telling his story to the stonecutter and retching the late dinner he had been offered.
That night, he suffered feverish nightmares.  They depicted the fountain girl who endlessly repeated her plea.  But, unlike what occurred, she would instead turn into the beast and rend him limb from limb.  He also found himself walking down a trail in a gnarled forest, seeming perverted from unspeakable corruption, and ghastly creatures would burst forth from the shadowy foliage to feast on his flesh.  He was powerless to stop their attacks.  All he could do was scream.

Beast!! Run!!
The traveler slammed through low-hanging branches at a full sprint, heading down the constricted, forest trail.  His heart pounded in his chest from all the exertion.  Sweat stung his eyes, adding to his frustration.  His breathing was in desperate gasps, trying to feed his aching lungs.
It’s behind me!!  Go, GO!!
The blur of trees to his sides remained an impenetrable wall of undergrowth.  Gashes on his face and hands seeped blood.  The constant stinging from a sore shoulder kept his mind in a cloud of agony.
Its breath, so hot!!  The teeth, so sharp!!
All came to an end.  A wall of rock rose in front, cutting off his forward progress.  Unable to stop, his body slammed into the solid stone face, the traveler spilled to the ground.  His body laid still and unresponsive, wracked with pain from the collision.  Eventually, the traveler pulled himself up and started clawing at the wall, his hands left trails of blood as he uselessly tore at the stone.
No!!  Let me out!!
A hot blast of air hit the traveler's back.  It was over.  He knew the end was here.  The beast had found him.  He curled up like a newborn babe and began to cry.
The vile creature.  Nnooo mmooorrre..."

Light shining down from a nearby window woke him.
"Well, the burnin' of ya fever has stopped."  The sculptor stooped down and unlayered the blankets.  "Eat."
The traveler forcibly pushed himself up to eat, his heading pounding.  The fever did nothing to abate his hunger.  A tray topped with a bowl of broth and a chunk of bread sat on a table next to him.  With a ravenous surge, the traveler had two bowls' worth and a complete round of bread.  His thirst seemed endless, even after four cups of cool water.  His hands still trembled from the past nights' experiences as he ate.
"Give me a day, good sir, to recuperate and off I must go to end this nightmare," the traveler asked.
"Do what ya mus', son."
After a day of nothing but continued sleeping and eating, the traveler could no longer maintain his patience.  He could feel the draw of her depraved soul.  The constant tugging on his mind was growing stronger.
The following morning, the traveler once again began his trek to find the beauty he encountered that first day in the market.  The constant calling he felt led him back towards the old farmhouse.  Nearing his destination, he could see the orchard that must have been once a bountiful sight to look upon.  But, instead of continuing towards the house, he veered north towards a distant treeline.
The woods that stretched out before him were not the same as in his dream but a trail cut right through and seemed his only option, calling to him like a gentle lullaby.
Picking up the pace, he sped down the trail into the unknown. The woods thickened as he made his way and the light from above penetrated less and less.  The trail slowly constricted and day seemed to turn to night.  The traveler knew the sun still sat high in the sky but the cramped vegetation made it impossible for any light to break through.
His pace slowed and his dread grew.  The sounds of nature gradually quieted.  Occasionally, he would turn, thinking he saw fiery eyes peering at him from the depths of the woods.  His head and arm began to throb from the returning ache from his injuries.  Fatigue ate into his heart and purpose.  The despair still lingering in his mind started to grow by the minute and his feral dreams seeped into his reality.  The steps he took became harder and harder to make.
The faint smell of smoke penetrated the stuffy air around him.  The track widened and opened into a clearing with a small, wooden shack sitting in the middle.  The structure appeared to be crudely built and made from the forest’s litterings.  A small wisp of smoke climbed from a hole in the thatched roof.  Surrounding the cottage were standing-poles topped with various animal and human skulls, and cross-bars affixed with lines of twine knotted with sticks and small bones.  An unused smoking rack and a smoldering fire pit with a spitted animal sat off to one side.
Courage, the traveler cried inside his head while squeezing the talisman around his neck.  He worked up the nerve and approached the front to push through the front door.  The clumsy barrier was a tattered flap pinned to the top of the door frame.
As his hand touched, something hit him hard, sending him off his feet in a backwards fall and landing hard on the solid ground.  The traveler laid in the entry with a woman of unearthly beauty atop him.  She stared at him with hate burning in her crystal blue eyes.  Cold hands clenched down on his throat, cutting off all his breath.  The traveler’s greatest efforts to dislodge the woman proved to be futile.  Her strength, having to be that of four grown men, did not abate.
His surroundings were beginning to dim, the inevitability of entering the abyss was crashing in on him, and panic rose from his gut.  His gaze drifted up again to the face of his assailant, her perfect features started to blur from his tearing eyes.  The pinching of the talisman’s chain cut into his neck as her hands continued to constrict his neck.  The mirror danced around in the struggle, flashing to and fro in the light.
With a start, her head jerked down and she released him in a cry of agony.  Her skin lit up in an iridescent flame and her body began to age rapidly.  The once young woman now looked to be a wilted and ragged crone with four blood-red eyes, stacked pairs on an elongated forehead.  Her jaw hung at awkward angle with a twin-line of serrated teeth behind taut lips.  With a cry of sheer terror, she turned into a pile of dirt.
The traveler, up on an elbow, gasped for breath.  Looking to his chest to see what caused her release of his neck, he saw the mirrored talisman flash brilliantly and disappear.
Eyes stinging and blinded from the searing burst, his heart abruptly felt relieved of an unseen pressure and replaced by a sense of emptiness.  Minutes passed as he lay there.  His vision did not return.  The traveler screamed.

A week had passed and he stood again before the gates of the city.  Not knowing exactly why, the traveler decided to return to the fountain.  He was struck with dismay when he neared his destination.  The fountain was not pouring forth water as before; it sat quiet and still.  Though, he could smell the scent of fresh flowers.  He could feel her calming peace wash over him, and his heart was lifted, for there would always be a remembrance of her delicate beauty, not the horrific tragedy that befell her.
Posted by Tacitus Publishing at 5:16 PM No comments:

Haunted by the Past 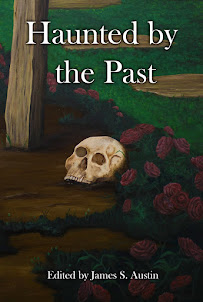